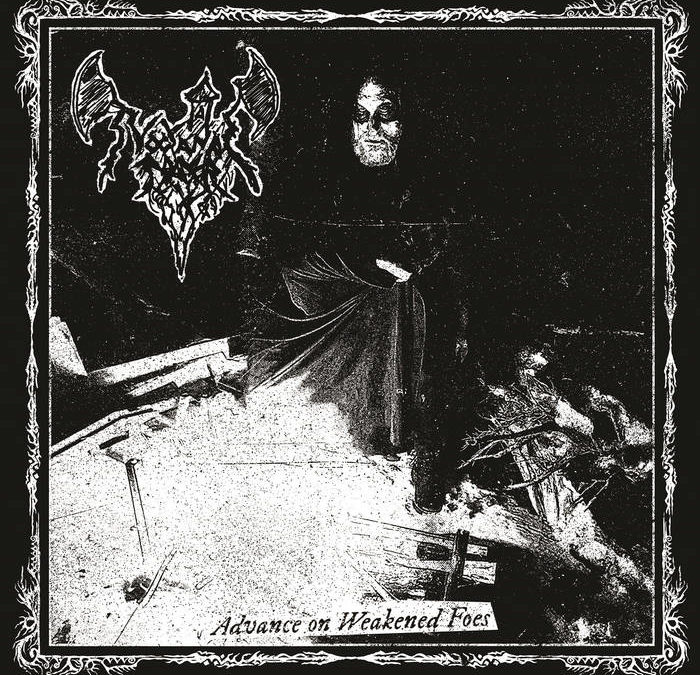 One thing that goes hand in hand with black metal, that doesn’t really resonate in other genres like it does here, is demos. Demos hold a special place for fans of black metal, because it shows the organic start of a project. Demos tend to have a raw sound to them, which really helps bring the aesthetics of black metal together as a whole. Nocturnal Prayer is an upcoming band from Canada, Newfoundland and Labrador to be exact. With only two demos under their belt, there is still a lot of time for this band to take off and to make a name for themselves.

Advance On Weakened Foes is a compilation of both demos. It’ll catch you up to speed on what this band has accomplished so far. And what they have accomplished is releasing great trve black metal! The album has a total of ten tracks, split right down the middle. The first five tracks belong to the first demo, Grim Sermons Of The Nocturnal Prayer. And the latter being from the second demo, May You Lay Waste To Astral Gods With Star Disintegration. Both sides sound very similar in sound and style, so it would be easy to assume that this is just a full length album. Within the first second of the release you are thrown into a cold rugged dungeon where Nocturnal Prayer takes no prisoner. You will feel the wrath and despair that has been tormenting them for so long. As some might know, I’m a huge riff guy. If a band can bring the riffs that are catchy and memorable then they’ve just earned a new fan. With that being said, before the first track ended they earned my fanhood. In addition, anyone who is a “trve kvltist” will approve of the album right away. The production is perfect, giving the feeling of the glory days back in the early 90’s. Vocally speaking, you can feel the pain and anguish within his voice. With an almost DSBM style of screaming at times, you will have plenty of moments where things seem fresh and mysterious. It will bring a want within you to continue the journey to see if any more surprises get thrown your way.

All in all, this album is a great of example of what black metal is and was intended to be. It’s raw, it’s hidden, it’s dark, and it’s intentionally undesirable for the masses. Canada is a great place to get a wide range of black metal, and Nocturnal Prayer is on their way to be a quick thought when Canadian black metal is mentioned. Advance On Weakened Foes was released by Inferna Profundus Records on April 2nd, 2020. Make sure to give both the band and record label a like on Facebook and buy a copy of the album if you enjoy it as much as I did, as I’m sure you all will!