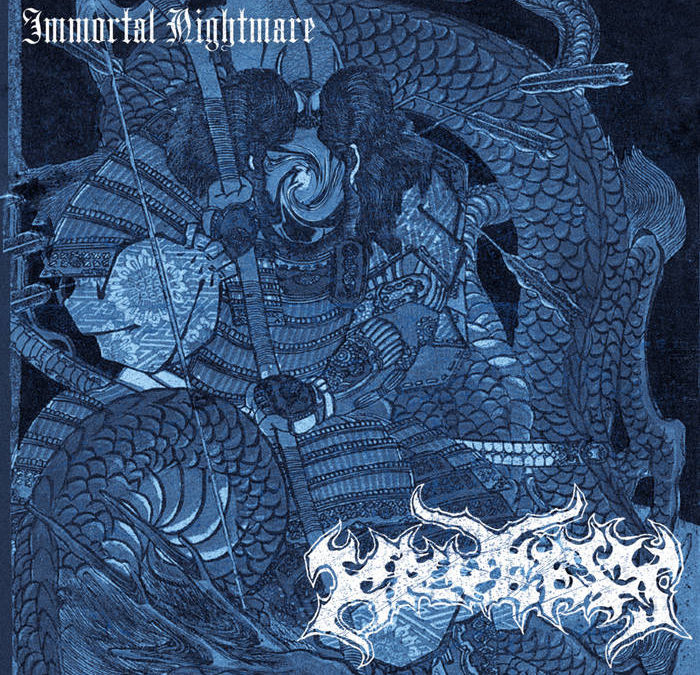 “I’m back with another Asian hardcore review!”

This one’s hella late. My bad. Apologies to the site, the band, and the readers.

Kruelty have been making waves on the internet since 2017 with their long series of splits and singles. They first popped up on my radar with Immortal Nightmare, the follow-up EP to their critically acclaimed full length debut earlier this year. The band says the new EP is a “quarantine release” consisting of two pre-recorded songs and a Grave cover; more on that later.

Immortal Nightmare plays its brevity as one of its strongest features. Clocking in at barely fifteen minutes long, it’s perfect for a quick commute or other short-to-medium activity; lately I’ve been listening to it while I shave my hermit beard into N-95 mask compliance. The other notable quality on Immortal Nightmare is the astounding mix by Taylor Young at The Pit Recording Studio and subsequent mastering by Nick Townsend. For how filthy and low the tones are on this EP, they never sound muddy or fuzzed out. I’ve been out of the guitar gear game for a long time, but I feel like I hear Seymour Duncan Invader pickups (think 00’s Nile tones) and a modded Boss HM-2 pedal providing the chainsaw death metal grind. In the hands of anyone but the most gifted of tonesmiths, this would be a recipe for unparseable static noise; and it certainly is over the top with distortion and overtone harmonics, but the mix is done in such a way as to make the madness sound musical.

The idea of a full-length album with a follow-up EP release is not new, but all too often the EP lives in the shadow of the record it proceeds. It sometimes feels like these are “leftovers” or songs that otherwise didn’t make the cut for the album, but Immortal Nightmare is all killer, thanks in part to it’s short run time. I feel like each of the songs on the new EP is better than most, if not all, of the songs on A Dying Truth. Especially that Grave cover. Holy shit, that Grave cover is excellent, with its thrashy d-beat groove added in that takes the performance to a higher level than just a reproduction. Another highlight moment from the EP is the totally death/doom-inspired bridge section of album opener “Narcolepsy”. Kruelty founding guitarist “ZUMA” said the band tries to strike a balance between being friendly goofballs in person and on social media but ski-mask and bandana tough guys at their shows. “[We] grew up on serious pits and serious music… I do not want any fighting at our shows, but they’re not meant to be peaceful and harmonious, you know?” Yeah, buddy; I know. And if you don’t know, sit through one brief listen of Immortal Nightmare and it will all make sense.

Recommendation – Kruelty’s standard song format is low, slow, and kinda long, but with only three of them in Immortal Nightmare, it’s easy to listen to again and again