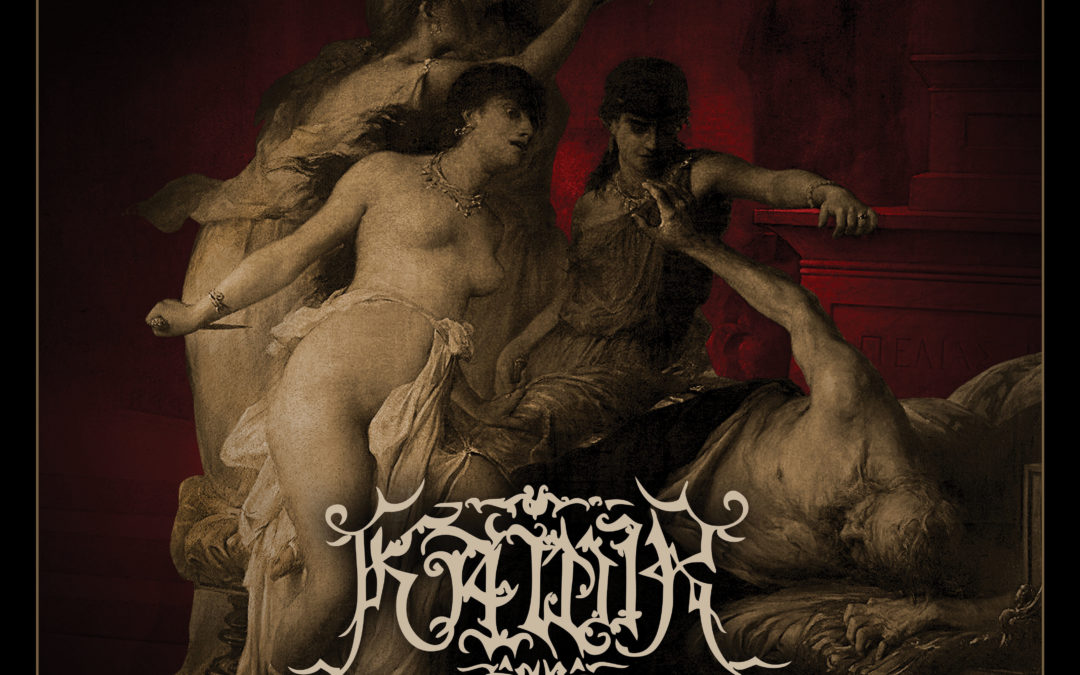 While Kawir is not a band I’m familiar with, their country of origin, certainly is. With fairly well known acts, such as Rotting Christ, Necromantia, Naer Mataron (and Nar Mataron), and Septic Flesh, I thought I had a vague idea of what to expect. Well… I was wrong.

Kawir has had many releases since their inception in 1993, and this is their eighth full length release. Sprinkled in between these albums, are quite a few EPs, splits and compilations. So many, in fact, that I am quite surprised that I’ve never heard of Kawir before. Almost as surprising, as their sound… Kawir doesn’t really sound like any of the aforementioned bands, as their sound, for the most part, contains many pagan and dare I say, near-viking aesthetics. The occasional bouncy rhythms and chanted vocals, definitely add to this.

The thing is… These themes are not consistent throughout the album, and some tracks come across as straight up, raw black metal. This ends up leaving the album feeling very two-faced, or like this is a split, with two different bands on it. The first track, Tydeus, is VERY pagan and viking sounding, reminding me at times of Nokturnal Mortem. While this is definitely not a bad thing, compare this with the third and sixth track. They don’t even sound like the same band. Again… This isn’t necessarily bad, as far as songwriting goes. In fact, every song on this album is pretty damn good and for the most part, stick in my head, with driving guitar riffs, and a creative rhythm section, long after I have stopped listening.

As mentioned, the opener, Tydeus, is a “pagan” influenced track, sounding like a war coming to a grisly end, amongst tall, wide stretching grasslands. Mid paced and constantly striking a feeling of forward momentum, with powerful vocals, this first track is a great way to introduce Kawir and this album. Elements in this song sound completely in line with later tracks, especially Atalanti and Limniades.

The second track, as briefly mentioned, follows the pagan feel and sounds like the perfect progression, for the album to take. This song starts raw, with an addictive guitar riff, harsh and echoey vocals and pounding drums. About two and a half minutes in, you finally can hear a Greek band’s influence, and that band is Rotting Christ. Good lord, if someone put this part on, and asked me who I thought it was, I would be POSITIVE that it would be the ole Rotting Christ crew, with a new tune. But no… and I’m not even disappointed. This track goes great with the album and the flute usage, towards the end, definitely adds a great folky element.

The third track, Danaides, is where the straight up, raw black metal comes in. Surprise! No pagan elements. No flutes. No chanted vocals. Yet… This is my favorite track on the album. Forward momentum is the name of the game here and they excel in that department. The vocals are so damn harsh and powerful, they actually stand out here. This track is simple, and it absolutely KILLS.

Ok… So where does this album go next…? Back to pagan. Limniades opens with some nice bagpipes, followed by a speedy, infectious melody. This song starts strong. The occasional heavy use of toms, is a very nice addition to this offering and combined with the excellent cymbal usage, this might have the best and most creative drumming on the album. Great song.

Alright… The fifth song, titled Colchis, is pretty much an instrumental track. Featuring mostly acoustic guitars, female chanted vocals and some rhythmic pounding… This track just doesn’t do it for me. Sure, it will be argued that it “breaks the album up”, but Kawir already accomplished this, by virtually sounding like two different bands in the first place. Decent, musically, but it feels like it was just thrown in there for good measure and to take up nearly six minutes of time. This easily could have been a two minute track and it would have been a lot more pleasing… Instead, I ended up skipping it, after just a short while.

Twin guitar melodies and chaotic drumming, is what the closer on this album is all about. So raw. Dripping with anger and focus, this would be my favorite track on the album, if not for the abrupt ending. So many good melodies, over an incredibly long and epic journey, this one is worth listening to over and over. At about 5:14, the mood changes significantly, and we are treated to some nicely strummed guitars, flute and spoken words… The main riff kicks back in, a bit later and damn. It is powerful. Definitely a great closer, with all members firing on all cylinders, this is a great example of Kawir and their potential power. I just wish this last song hadn’t finished so abruptly, therefore ending the album abruptly, as well. Still. Amazing song.

While I thoroughly enjoyed this album, and will look into Kawir’s back-catalogue soon, I feel like this band has a slight identity crisis. Do they want to play pagan/folky black metal? Or are they more into playing straightforward black metal tracks, with almost zero pagan influence? I’m not sure, but track by track, these guys are actually quite good. Each member seems to be proficient at his instrument, the songwriting and structure is well laid out and creative, as well. This is a pretty good album that I’ll spin at least occasionally. I’m looking forward to checking out their past material and seeing if it is indeed, as two faced, yet well executed, as Αδράστεια. Definitely for fans of Nokturnal Mortem, Helrunar and even later Thyrfing.