INTERVIEW: Curse Upon A Prayer

Hailing from Finland, long a home of controversial bands, and choosing to make attacks on the Islamic faith the subject of their music, the band Curse Upon A Prayer has long been viewed as problematic. I decided to dig in to see if they were indeed worthy of censure. For me, the line is this. Attacks on a set of religious beliefs, long a centerpiece to metal of all sorts, should be fine, whether Christianity, Islam, Judaism, Paganism, Satanism, etc, etc, etc. That’s all fair game, as long as the focus is on the belief system. My issue is when the content flips to attack a racial, ethnic, or religious group of people. In other words, an attack on Islam is fine, while an attack on Muslims is not. We all have the right to freely choose our beliefs. We also all have the right to question any system of beliefs. After doing my research, the conclusion I reached is that Curse Upon A Prayer does the former. They are certainly blasphemous, which undoubtedly causes controversy. I found no evidence that their attacks went beyond the religious creeds though. Before I ramble too much, let me just move into the interview and let them speak for themselves. 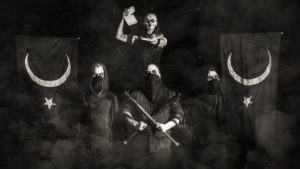 Hayduke X: First of all, congratulations on Infidel. The album is a fiery masterpiece. Are you happy with the result?

Curse Upon A Prayer: Thank you, glad to hear that. And yes. We’re very happy with the result.

HX: I was first introduced to your project through the excellent The Three Woes EP, so I have a little catching up to do. Can you take me back to the beginning and fill me in on the formation of the band?

COAP: Originally the band was formed in 2010 in Tornio, Northern Finland. It started as a two-man band and remained so for four years until a full line-up was gained.

HX: Curse Upon A Prayer has been deemed as incendiary and controversial by many. Can you tell me some of the difficulties you’ve had to deal with because of your themes?

COAP: Shows have been cancelled, our social media pages have been deleted etc. And couple of death threats here and there with occasional keyboard warriors talking shit. All the things you can very well expect when you choose to put yourself in this position on this day and age. 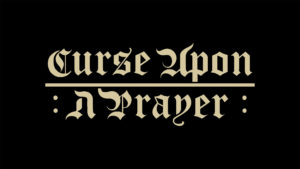 HX: Why do you think anti-Islamic themes are seen as so much more offensive than anti-Christian themes?

COAP: Islam strives to be above any criticism and the average human beings are indeed afraid to criticize it.  And unfortunately some people actually seem to think that islam is a race and has something to do with the colour of your skin, which is obviously not the case. Islam is an ideology and thus it must be open for criticism, regardless of those large claims it has made of itself and regardless of fear it has managed to plant on so many minds. By fearing islam you only give it the power it wants to achieve.

HX: Why do you choose to so specifically oppose Islam?

COAP: The anus of Jesus is not that tight anymore so it’s quite reasonable to switch to islamic prophets to get some satisfaction, so to speak.

And of course it’s also important to remember that the very core of this band has never been about islam. This band doesn’t exist because of islam and if that would be the case, we would have a very shallow purpose. It’s nothing but heresy to us in the end.

HX: Talk to me about opposition and reaction in the black metal theme in general. Is there a limit on what should or should not be allowed within the genre?

COAP: Personally I respect those who choose to act through their on will, regardless of any frames that have been set by others. Black metal as a genre is not that interesting since it is plagued by trends and sheep mentality as well even though some “individuals” like to pretend otherwise. It is just a common pattern to find comfort in being part of a herd just for the sole fact that you’re too lazy or just incapable to pursue anything within yourself.

That being said, I couldn’t care less. We know what we do and that’s all that matters to us.

HX: Tell me about the writing and recording process of the album.

COAP: Long, painful yet oddly satisfying. As it should be. 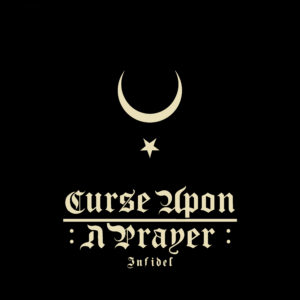 HX: The album art is simple and stark. It features only the crescent and star often associated with Islam, in addition to the band logo and album title. What do you think this brings to the representation of what you are going for on this release?

COAP: It’s straight to the point and leaves very little room for interpretation. Thus it fits to the overall nature of this album.

HX: What type of reaction are you expecting to this album?

COAP: Well, when we released the lyric video for the title track “Infidel”, people were getting banned from Facebook for sharing it and after the second single, “Al-Masih ad-Dajjal”, our whole Facebook page got deleted. And some specific promoters decided not to work with us anymore because of this.  There has been a scent of danger and fear around this album from the very start and now it has started to manifest itself even further. Just like it should be in this form of art in general.

So judging from these events alone, I think this album might very well serve its purpose. All the feedback from our supporters has been nothing but overwhelming and that is all that really matters.

HX: Tell me about the metal scene in Tornio.

COAP: There is no metal scene in Tornio.

HX: Do you have plans to tour or play live soon?

COAP: Yes, there are several shows here in Finland this spring. Rest of the year is still pretty much open so it remains to be seen.

HX: What’s next for the band?

COAP: The focus is on the new album and everything that comes with it. New material has already started to take its form as well, but it is way too early to comment on that. 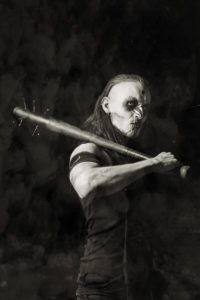 HX: Thanks very much for your time answering these questions.