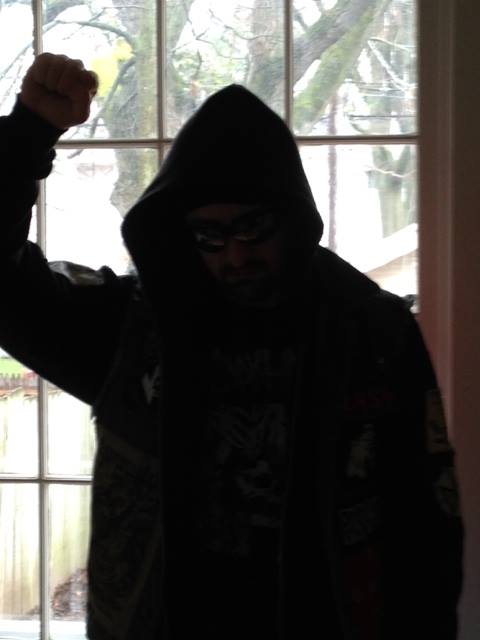 Another year has gone by and it’s time to tell you about my favorite releases. There are, as always, a few things to note. This list has shifted and changed a bunch over the year, and even more over the last month. My tastes are ever evolving. A month from now, I’m sure I’ll with that I’d added something else, or shifted the order around. My top choice has been locked in since I heard it. I’d like to note that Batushka – Litourgiya would have actually been my number one had it been released this year. Since it’s a re-release from 2015, it’s disqualified. It might be my album of the decade though. As recently as this morning, I put False Flag on the list, thus bumping another worthy off of it.  I could probably do a top 100 full of quality and worthy releases. Anything other than Caustic in the top 15, could go anywhere else in the top ten. Anything else anywhere on the list could go anywhere in the bottom 40. Without further ado, here is the list.

I love this band a ton and this album goes above and beyond everything they’ve done in the past. It’s the type of album that transcends genre. The Denver trio have essentially become they’re own genre. A very worthy number one!

Openly anarchist lyrics? Black metal? Violin? Give me all of that, and then give me some more. This one has actually been my biggest mover. Initially it didn’t strike me quite right, but it sure does now. I think it started somewhere in the 30’s on my list.

Dissonant death metal with waves of bleak riffs. This Minnesota trio do a masterful job of combining technicality with atmosphere.

Number 4:  Sunlight’s Bane – The Blackest Volume: Like All The Earth Was Buried – Innerstrength Records – USA

This album spent a few months at the top of list. Right up until I heard Caustic. The release by the Detroit area band would have been a worthy choice too, as The Blackest Volume is absolutely vicious!

An absolute nightmare of chaotic black and death metal. The riffs are stellar. Brutal!

Atmospheric and mesmeric, Immersion Trench Reverie is another stand out release from this project. I have loved everything they have done.

We head back to the Twin Cities for this one. There must be something in the water there. The amount of stellar releases coming from that region is astounding. This is not the last on the list. Stellar technical death metal – and I don’t even like technical death metal.

Nearly all of the releases on this list are ones that I personally reviewed. Six is an exception. Baker got to it before I could. I think he undersold it with a 4/5, but clearly also loved it. The combination of riffs, nastiness, and traditional instruments is outstanding.

Number 9:  In The Company of Serpents – Ain-Soph Aur – Independent – USA

Ain-Soph Aur caught me completely off guard. I missed it on the first pass, then started to listen to do a quick review for a Round-Up. Suddenly a quick review wouldn’t do. Completely compelling.

Without a doubt, the mellowest release on here, but it is soooo good and soooo catchy. I love listening to this one.

My favorite of the three Cloud Rat splits this year, though any of the three would be worthy additions to this list. I left the other two off just for the sake of variety, but also wouldn’t have a problem putting them on. On their side, this is Cloud Rat at their most unique. It’s also my overall favorite song of theirs, and I love them all. The Disrotted side is bleakly massive and fantastically compelling. Perhaps my favorite overall song by these Chicagoans as well.  Also, all six individuals involved are the best people.

From US black metal, we jump to French black metal, and a supremely suitable pick for number 13. The Inside Scriptures is absolutely suffocating in its density and dissonance.

A bleak and bile-soaked mix of gloomy funeral doom and black metal. Stirred to perfection.  Like drinking vinegar to ease your tormented throat.

Off we go to Brazil, by way of an amazing label from India, for another heart-wrenching and terrifying mix of doom and black metal.  For my local fans, Brian Sheehan, the artist behind Legerdemain and a member of the band Fell Ruin has designed a killer shirt for these guys.

Back to Minneapolis for this far too brief release by my favorite USBM band. Everything these six individuals create is (dark) magic and this release is no exception.

It comes as no surprise to me that these Aussies are a killer band, as Australia is another region that has a stellar scene at the moment. What is surprising is that another technical death metal band caught me enough to get on the list.

Giant combinations that are both stunningly beautiful and stunningly brutal, Amain delivers on it’s massive promise. This is symphonic metal at its best.

More French black metal? I think so! Allow yourself to be sucked into the slow burning vortex that is F.O.H.A.T. Powerful stuff.

Amputheatre almost didn’t get a listen based on being billed as brutal death metal. The fact that the promo material also contains the term grindcore made me take some time. This is absolutely stellar deathgrind that is absolutely brutal, but also dynamic.

Absolutely murderous madness from California in the form of some of the best raging USBM you’re likely to hear. Also, this is only their first album…

HM-2 madness.  To be used as a soundtrack for burning down the world.

Dark, swirling black metal from Chile. Definitely a pleasant surprise when I first hit play on this one. Actually confusion reigned at first, as the initial track sounds like a classical composition…not metal at all.

I was blown away from the first listen. The Sarcophagus are not re-inventing the black metal wheel, but the playing is exceptionally tight and the compositions hit all the right notes (pun intended).

Starting out the second half of the list, I present you with mind and genre bending USBM from Brooklyn. Here, on their fourth full length, they demonstrate the consistency and excellence required to be considered masters of the craft.

Number 27:  Bison – You Are Not The Ocean, You Are The Patient – Pelagic Records – Canada

Sometimes crushing, sometimes beautiful, sometimes both, Bison have created a sludge record for the ages. Also, this is the first on my list this year from my homeland.

Back down-under for this nightmare. The Furor will shred you…like, with a cheese grater…on your face. Seriously, face-melting stuff here.

Coven is a black metal stage play performed on the album…and it is seriously good. Definitely black metal, but unlike anything else I’ve heard.

Long form progressive black metal with death metal influences, Cormorant has been spreading their own brand of darkness for awhile now. Diaspora continues the trend of excellent releases. If you don’t know the band, it’s worth your time to start at the beginning and work your way forward to this one.

The continued growth of this band is a site to behold. I’ve liked them from the start, but Spreading Adder if on another level. They call forth anthropomorphic rage and then wrestle it into oblivion.

I was a little disappointed with this release from the perspective that I felt the band rested on their laurels a bit. In other words, it’s an excellent release from and excellent band, but doesn’t really progress beyond what they’ve already done. Still, WITTR….

Experimental black metal with lots of hard edges and sharp turns. This will take you to dark places.

Back to Minneapolis for more black metal. This one is a little more atmospheric and progressive. All Paths still packs a serious punch though.

Full of heat and rage, Celeste plays a potent mix of black metal and hardcore. Infidele(s) will burn through your psyche.

I’m really excited about Balance of Terror, a deathgrind band I discovered in a Facebook group of which I’m a member. They remind me a bit of a deathier Napalm Death (who happen to be my favorite extreme metal band regardless of genre). Balance of Terror is one to watch.

I’ve seen a lot of buzz for this Sarkrista release, and rightly so. Summoners is a boldly emotional black metal journey.

A bit of a change from most of this list, Muro play classic heavy metal with similarities to NWOBHM. Excellently done! Vocals are in Spanish (which is fine by me) except for their cover of Rainbow’s Kill The King.

After that little breather, let me introduce you to the complete sonic annihilation that is Henry Kane. The one-man project of the ever prolific Jonny Pettersson, this release takes HM-2 death metal to the absolute chaotic max!

Gnarly blackened death metal from the pits of Edmonton in Canada. The release would probably be higher with a little better production. Still, the excellence shines through.

Seriously ripping crust from India, False Flag just made the list this morning. As such, I’m not confident in placement. If anything though, it would go up the list. Less than fifteen minutes long, it’s too short. I can’t wait to hear more.

Riff-driven death metal from Malta that leans towards the brutal.  It’s all about the riffs, man!

Everybody’s favorite horror metal weirdos, this Detroit release is nothing like anything else on this list, even though it shares a member with Temple of Void. Bizarre and compelling.

I heard this one really early in the year. I may have even received the promo at the end of 2016. It has stuck with me throughout. Absolutely stellar death metal with some black metal influence. Those riffs though!!!

Featuring a potent mix of sludge, doom, and hardcore punk, Olde finish up the list for us. I love this album!