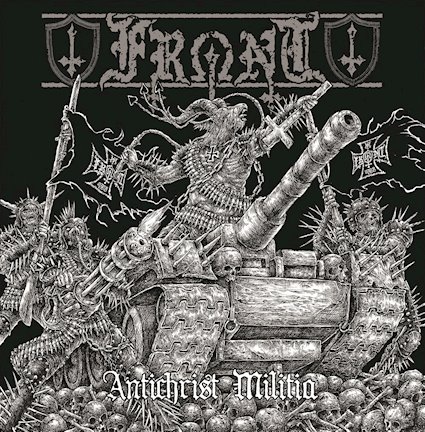 A bellowing goatdemon wearing bullet belts, chains, and spikes galore, and brandishing an inverted cross in one hand and a whip in the other sits atop a tank (also adorned with big fucking spikes), flanked by zombie soldiers in similar attire holding bayoneted rifles (turned iron cross logo-flags) and a goddamn mini-gun, rolling over a hefty pile of human skulls and bones, all in gray-scale. Sounds like some war metal shit right? Perhaps in aesthetic and attitude, but what we are getting with FRONT’s fantastic new twenty three minute mini album/EP/whatever is something more interesting and engaging (IMO of course): After the forty some-second intro track “Doom Cult Legion”, which is essentially the cover art depiction made audible, Antichrist Militia (an apt and fucking obvious title if I’ve ever seen one) sounds to me like old school brutal death metal with some tasty morsels thrown in.

Grinding, riffy guitars and demonic-as-fuck vocal onslaught which advocates death and war and Satan, riding a veritable battery of artillery percussion, to nobody’s fucking surprise provides the foundation to this little Finnish beasty. “Antichrist Militia” the title track kinda reminds me a bit of old PANZERCHRIST or even VITAL REMAINS at times… but I’m sure better comparisons could be made by persons who are more versed in OSDM than myself (read: probably everybody). Mkay that’s not the whole story though, once in a while we have some brief but pretty great rock’n’roll raid siren wailing guitar solos. Oh and pretty damn regularly (“Iron Front” is just a good example as any) we’ve also got some galloping-groovy thrash inspired progressions ‘n shit. Cool.

The next track, “Venom & Salt” kinda sounds like 80’s METALLICA is getting fucked in the mouth by a tank, while the one after that (“Mouths of War”) is more paced and venomous, which is cool an all, but also unfortunately features quite a lot of soundbites including what *sounds like* a speech of a notorious genocidal dictator, which I personally find way the hell overdone and veritably lame, but I guess a lot of these metal dudes are into that (and, to be fair, I mean, I guess those sorta mouths are indeed the mouths of war). The closer “Machinegun Blasphemy” is a pretty straightforward OSDM affair which benefits from what sounds like a bunch of actual automatic weapon ordnance, leading to the conclusion that …if nothing else, these guys sure know how to harness the crap out of literalism with their titles.

Overall impression? Antichrist Militia is a short, sweet, and aggressive ode to the very roots of belligerent and bestial deaththrashspeedmetals, void of nuance. I’d call it fun if I wasn’t afraid it would piss off the band. Shit, I just kinda called it fun didn’t I? Fuck it, it’s fun.