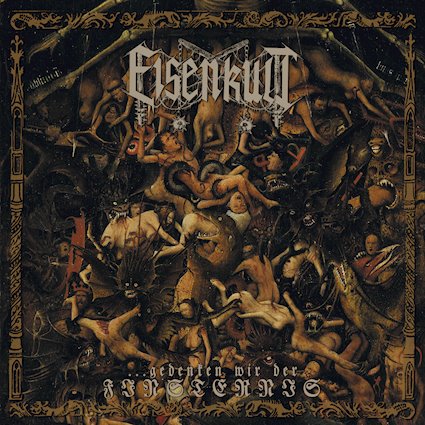 Take a trip into the dark ages with me. Eisenkult shall be our ferryman. Just looking at their logo, adorned with spiked flails and clubs should give you the idea.

A dungeon synth laden, flute-like intro begins the journey and sets the tone for the medieval clash we are about to bear witness to. The darkness sets in right away with the start of the first black metal track, Stahlross, as drums pop and blast a groove, guitars buzz in tremolo style, the vocals screech in German chants and synths float in and out providing atmosphere. There is a distinct rawness to this album that lends itself to the dark vibe while staying infectiously melodic. A piano interlude breaks the harshness before the title track Gedenken wir der Finsternis starts the second half of the album, where there is more variation, as the synths play a larger part in laying the foundation before melodic guitars play and build an ominous air that speeds up into more typical blasting black metal, tortured shrieks and all. It all concludes rather neatly in an outro that loops back towards the same synth heavy style of the opening piece.

While there is no out-of-the-box approach, here it is well executed. Memorable riffs and raw atmosphere should make for a highly enjoyable listen for anybody who considers themselves a fan of second wave black metal.