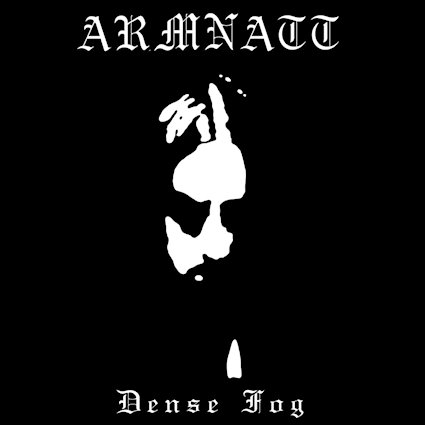 1992-1994 are the years that define the trve kvlt sound for me. Raw production, a newer, more focused version of the old school sound that has more to offer, but still somewhat simplistic, and the specific badass feeling you get when you think about the golden age of black metal. Armnatt is a band that checks off those requirements with ease. Another Signal Rex band, Armnatt is also from Portugal. Every year I notice regions or labels that really stick out and make an impact on my ever-changing musical journey. This year both the Portuguese black metal scene and Signal Rex will definitely be a highlight.

Dense Fog is the title of Armnatt’s newest offering. In this release you will feel the spirit of trve black metal. You will pull out the old Halloween face paint, and you will search for your cloak and sword, as it’s time to terrorize! The album itself contains ten tracks and clocks in at a little bit over twenty-six minutes. With the longest track being four minutes and twenty-six seconds, it stays trve to the general second wave complexity. There’s a no trend policy that is strictly in forced within the music. If you want to critique or suggest constructive criticism then you can go shove it and listen to the sellouts of death metal. The attitude and fashion this record holds, give you the spirit of trve black metal, and you tend to not care what other people think because they are inferior. Basically what I’m saying is you’ll feel proud and trve kvlt. Remember, the trve kvlt scene thought of themselves as superior and trve evil; and sometimes it feels kick ass to put yourself in that heart racing, intense era. With a more simplistic sound in the guitars and drums, you understand that this isn’t about wowing people, its about being something that’s will be a turn off to the masses. Blackened riffs and supporting drums can be heard throughout the whole album. Nothing more, nothing less. I honestly think this album nails the overall intentions perfectly. Dense Fog was a great title to name the record, because the raw production on this release is thick but still transparent. The sound cuts through you like a rusty razor, somewhat sharp, but is still rough and bastardized. To me, trve kvlt is classic and the sound is gold just the way it is. There’s no need to tweak or change what works. You should never forget your roots and this album does a pristine job of reminding us that this is what it’s all about.

Dense Fog was released on May 1st, 2020 through Signal Rex and can be found on Bandcamp. Physical releases of the album can be found on the label’s official website. Make sure to give both Armnatt and Signal Rex a like on Facebook. You don’t want to miss out on updates from either source.